The Money Pit - Triumphs and Tragedies

Ok so this really isn't as dramatic as it should be to use those two words... but I'm all about alliterations (SeeWhatIDidThere) and "Wins and Losses" sounds lame.  I also called this "Goodness and Grievances" in my post yesterday and I think that's the best description of what we've got going on here.

So, here are a few of the good things and disasters that have been going on behind the scenes during the era of The Money Pit.  Also, I need suggestions on one of the "tragedies"... so keep reading and help.  And good GRIEF this post is long.  I guess I needed to ramble to someone and you are the lucky one who will read this that gets that honor.

GOODNESS
> I signed up on this blog to win copies of this book I wanted to read (it was about werewolves and high schoolers so you know I would have to love it).  I won 5 copies of the original and the sequel and didn't even finish the sequel I was so "over it" so now I have 10 books I didn't want.  BUT... I did also get a $100 Visa gift card at the same time!  I didn't even know that was part of the giveaway so that was very exciting.

> My mom gave me two pretty sconces that she'd purchased but never even opened and I decided to use them on either side of the wet bar opening.  When I got a good look at them, the sockets were really different and you could see them through the white glass.  SO... I took them to a lamp shop in Austin to ask for an estimate and her response made me nervous about having to "research and find the right pieces" so I had the bright idea to use white paint to make the colors match and a piece of PVC pipe to fix one other piece.  And it totally worked!!  I fixed my sconces for about $3!  I feel like one of those "do-it-yourself bloggers."


Before.  You can't see that we also have a missing piece on the gold one on top of the wrong size and color... but we did.  And I fixed it! 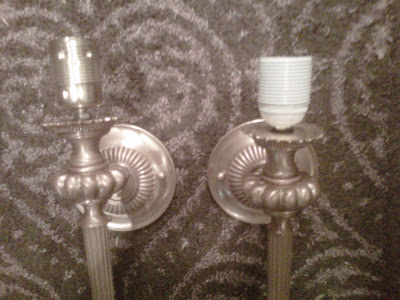 After full pic.  Sorry they're on my unmade bed.  I mean, not THAT sorry.  But sorry. 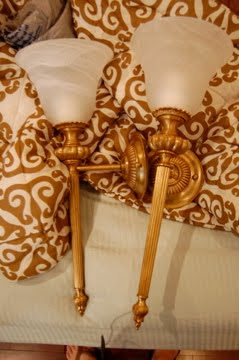 > This was a "win" that I am about to swiftly counter with a "loss" in the next column, but a couple weeks ago I did get $15.64 back on fan that had gone up in price but wasn't marked up yet in the store.  So that was exciting.

> Kate loves The Pioneer Woman.  FINALLY.  I chalk this up as a win.

GRIEVANCES
> I have gestational diabetes.  I was going to proclaim this a "win" last week when I was having really good numbers and all was right with the world, but somehow I'm eating the SAME foods this week and my numbers are higher.  I've even failed a few tests which really stinks.  One test I failed because I ate a fajita taco with "grilled" onions on it at a bachelorette party this weekend (yes, I said bachelorette and it was actually a full weekend at a lake house complete with a party bus and Pete's Piano Bar... I only stayed out until midnight-ish that night but everyone still said I was a "trooper."  I was like, man... people do NOT expect much of you when you're pregnant!)... ANYWAYS.  After failing my test an hour later and being totally confused because I've eaten this meal a LOT lately and this one didn't even have beans, I remembered the onions.  They weren't sauteed in butter... they were caramelized in molasses.  DUNDIES diabetes monitor.  Dundies.

> If you are still reading, which I doubt, this is where I need help.  I'm having a really hard time finding mirrors for my guest bathroom... any ideas aside from Ikea, Hobby Lobby and Target?  I found perfect ones at Hobby Lobby but the frame was too thick and I couldn't open the cabinet doors on the sides.  I didn't see anything at Ikea or my Target.  IDEAS??

> I accidentally got Augie's "friend" fired.  I call him "friend" because I never had any idea what his name was.  But I told Augustine that he hadn't shown up one morning and I knew he was coming at some point but had no car.  He showed up later and told me he had to go look at a car that morning and then he walked like 6 miles to get to my house.  But Augustine fired him because that had happened like 3 times before.  I felt so bad!!

> Also, the hot water was out for 5 days because something broke and I was out of town so we didn't realize it with showers.  I did take one where the water was sort of hot, but I think it was just from the 107 degree heat.

> My car is in the shop and has a broken "strut"... whatever that is.  And it's going to cost like $5500 to fix.  Dundies super cool looking Mercedes Benz.  I will miss how awesome I felt when I drove you.

> Daniel's car wouldn't start today and he's out of town so the guys had to get it out of the driveway and jump it and I had to go buy a new car battery.

> And the latest thing is that they started running a $5 per gallon Mail In Rebate special TODAY on the brand of paint I've been buying.  Except I bought all 20-something gallons of the paint I needed LAST week not this week.  I was very happy when I got that news.  Oh, I wasn't?  No, I wasn't.

I'm exhausted just reading about all of that. Sorry about the tragedies, but...one more week???

Liz,
I've had fun following the Money Pit project! Thanks for including us! I will keep you in my prayers as you persevere through the project and through pregnancy. I wanted to tell you that one good place to look for nice looking, cheap mirrors is Home Goods. Good Luck!

If it's not one thing it's your mother...At least that's what my dad says.