It will be no surprise to you to hear that things didn't go EXACTLY as planned on Day1 of this adventure.  Basically...

- The shed cost an extra $177 (I know this specifically because Daniel is making me keep up an expense spreadsheet) because they had to build a platform for the bottom.  When it said it came with a floor kit, it meant you could put it on these metal rails but only if your ground was perfectly flat.  And if it wasn't, you could either put down some sand/gravel (and it would shift over time) or build a platform.  SO... platform it was.  They are STILL working on the shed three hours into Day2 and the roof isn't even started yet.  Can we imagine if Daniel had tried to do this himself?!  We cannot.
See all these hundies of screws and bolts and washers?  These are still remaining for the rest of the shed this morning.  There's a whole 'nother bag for the roof! 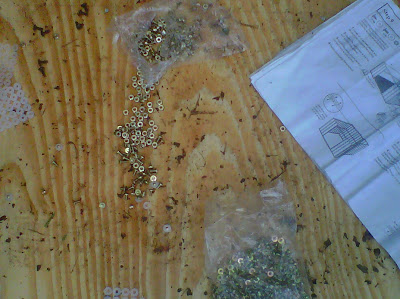 - It rained.  When workers are working outside and using power tools, they cannot exactly continue in the rain.  So that was just a bonus.  Also, rain in the forecast today!  WHOOOOOOT.
Moving on to today... we already gots issues today.  BIG ISSUES for today.  Okay, well one big issue to be exact.
- We can't level our foundation.  When the slab was getting bad in the early 80s and basically sliding down toward the street, the really old lady who lived here didn't want to deal with the issues that would arise from leveling the slab when she fixed it... so she just put piers under it and repoured the slab ON the slope it was currently on.  So that was awesome.  The slab is all good (we even had the guy who built the foundation for the Austin airport come out and check it out), but the house has a pretty good slope to it.  And by good, I mean... not good.
SO, long story but we were going to attempt to level it out somewhat and deal with the cracks as they came.  And today, after Daniel HACKED up the front bushes yesterday (and by hacked, I mean annihilated), they started digging and somehow determined that it wasn't going to work as expected so now we are not leveling the slab.
I mean, let's be honest with ourselves, it's not like these were worth saving.  These are the "afters" but they really didn't look that much better before.  There was just a lot MORE of each bush. 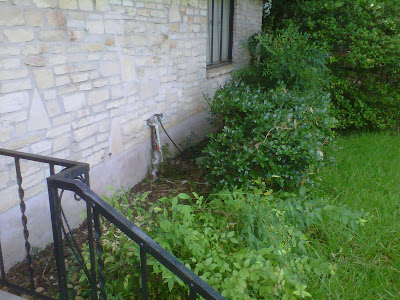 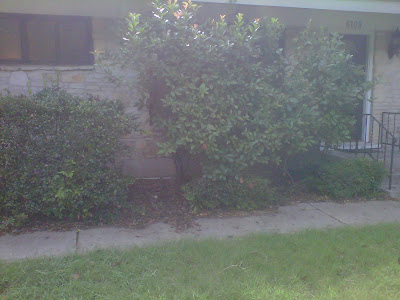 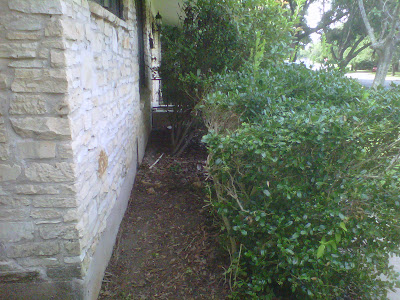 - Oh, and also... there's a root (slash large rootzzzz from the very dead tree in our front yard) going through our water line to the front of the house and sometimes it gets clogged.  And when it does, things like this happen.  (That is paint from the brushes I was rinsing in the sink in the guest bathroom while trying like EIGHT different paint colors in there because I hate everything.)
The guys who were digging by the front door this morning to see about the slab were like... uhhhhh.  WTH is that. And then I remembered it was paint and reassured them that my pee is not milky white.  In not so many words. 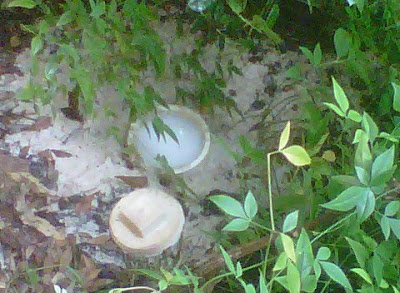 So that's all I have for now.  They are working on the shed and I hope it will get done today and we can also get the bathroom/wet bar demo-ed today.  In the meantime, I am rethinking my initial plans for the wet bar and I'm also trying to figure out ways to make the house feel less sloped through the kitchen.
Weekends are shopping time with Martin... main contractor.  I was at Lowe's three times yesterday.  The lady at the paint counter is my friend.  Onward and Upward!

(Oh, real quick a POSITIVE note... because there are definitely a lot of those happening... I did dance it out to "Safety Dance" from Glee this morning as I painted up samples in the bathroom (see the color above).  And I ate some Cocoa Puffs.  And I've already walked over a mile just in my house so that made me hungry so THEN I had a breakfast taco.  Ok, so maybe this positive direction is sliding backwards.  I better go dance it out a little more.)

p.s. Please watch the Safety Dance if you haven't already seen it.  Gets me HYPED.  So hyped, in fact, that I was dancing to it in my car the other day and this guy was sitting stopped at the red light waiting to turn right and he didn't turn until I happened to look at him so he could grin at me before he went.  Hyped.
Posted by Liz at 10:56 AM

We are sisters in house repair!!

Thank goodness we are sisters in Jesus too.... otherwise, we might end up sisters in rehab after all this is done!! :D

Goodness - I am stressed to just reading all of it! Hope it all goes well :)

P.S. THANK YOU for the kind words on my blog!

Sounds like fun times over at your house! Good thing you're pregs so you don't have to help :-) I LOVE Safety Dance! I may or may not have watched it 7 or 8 times on DVR - over and over! It's probably my favorite Glee moment of all time. Just THINK of the four person choreography we could do to that song if we were at Midtown! We'd start a flash mob in the parking lot - I'm sure of it.

I don't have to help with manual labor... that's a fact. But I basically have to pack the entire front of my house as we go. So that's been crazy!

And yes... Glee would have done wonders for our choreography opportunities in college! Let's move back to Midtown and see what we can work out.