If I have to get some work done on this gloomy morning when I'd rather be snoozing on the couch, this isn't a bad place to sit!

And how smart of me to put an outlet underneath the seated bar so I can plug in my computer!!  (I mean, it was intended for a TV someday, but this works, too!)

More pics to come... Kate yelled at me earlier about not posting.  But I have to get this Junior League stuff done.  A CHRISTMAS AFFAIR OR BUST, I SAY.

Also, the one, single, solitary weird "baby brain" thing that's been happening to me that NEVER happens to me is I've been typing the wrong version of words a lot... i.e. instead of titling this picture "sneak peek", I wrote "sneak peak."  And I've been writing the wrong "their/there."  That stuff drives me absolutely crazy.  Gotta get that part of my brain back before I commit an unforgivable sin like writing "Its crazy that noone might sea the errors in this sentance. Their notsosmert."  ACK.  That was painfull.  heh heh. 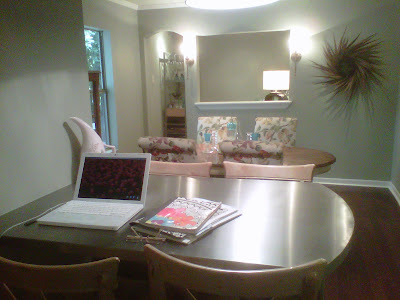 Gorgeous! LOVE the color.
Talk about a severe case of nesting... can't wait to see the whole house!

lovely, but I don't have a clue what I am looking at, where are you standing when you took the picture?

Standing in the kitchen looking at the seated bar across the dining room to the wet bar.

OH OH OH!!!! LOVE LOVE LOVE!!!! I knew I would though. :) PS- I tried really hard to think of a funny sentence using the their/there, and see/sea... I can't spend anymore time on it because its not coming to me. But just know I tried. :):)