Adventures with The Pioneer Woman

Two weeks ago, I went to the Austin installment of The Pioneer Woman book signing.  It was all it was cracked up to be... and more.  Here's my story.

I was supposed to be going with GlamAndFab and Pearls (p.s. somebody tell Pearls to get her butt

And then, I died.  I was standing in line when ALL of PW's four precious kiddos came marching up the stairs with boxes of t-shirts and cameras and stuff.  And, behind them, Marlboro Man!  He's truly as handsome in person as you always hoped he would be.  The highlight of the day was when I was laughing with two ladies in line (the ones in the pic below) and I turned suddenly around and was eye to eye with MM... like 2 feet away.  I'm pretty sure I blushed from my big toe to the tip of my ponytail.  It was like seeing a celebrity.  If you do NOT understand the blushing... PLEASE go here and read the PW/MM love story.  It's such gushy, romancy fun... and she's publishing it! 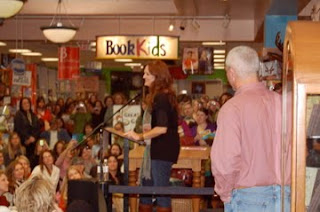 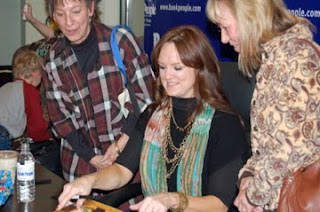 These are the ladies I was waiting with in line when Marlboro Man made me swoon. 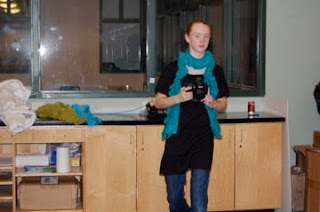 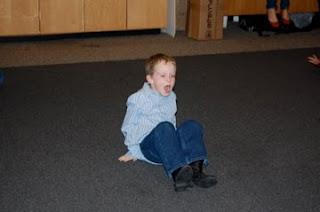 This is the "baby"... he attacked PW's arm while she was signing one of the three books I took to her.  Sorry if yours has a huge smudge.  It was worth it.  He's a cutie. 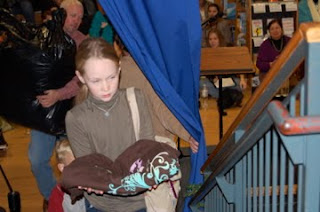 I gave this cute girl a magnet to give to "her dad"... it said "No husband was ever shot while doing the dishes."  I'm hilarious.  And then I felt like a loser for taking pics (see MM behind her!) so I stopped.  I figure that one day, when we're all friends, there will be time enough for that. 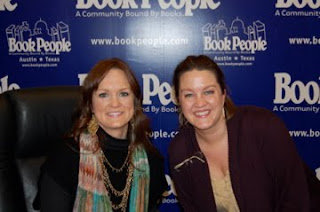 As you can see, we are WELL on our way to that day.  Then again, who does NOT think they should be friends with Ree?  Anyone?  I didn't think so.

To close out... I sent this note to PW when I realized Tiffany and Allison couldn't go to the signing and Tiffany had the idea that MAYBE she'd meet us for wine the night before the signing.  Of course, this was before I read that she has 13 MILLION hits on her blog a month.  Then, I knew we were out of luck.  I also found out that she didn't get in town until the day of the signing and was leaving the next morning.  I'm going to stick with that.

Pioneer Woman. Ree. Or even P-Dub,

Here is a shout out to show you some love.

We think your blog is the best one around...

Can't wait 'til you visit our weird, hippie town!

The irony is that we ain't got no cattle

Or kids whom to fight in the fun homeschool battle.

All we've got are pots, pans and water to boil,

And you, our instructor, as we tinker and toil.

Oh please, when in Austin, let us know you better!

Or send a "hell no" in a nice, neat form letter.

My pal has to work on the Thursday you're here...

Can we take you out Wednesday for some wine or good cheer?

I'll wave HI! at BookPeople and wish Godspeed on your way.

p.s. To show you that we're just nice, cute, normal, 20-something, church-going girls...

Lover of baseball and UT football and recently invited into the blogher world!

AHHHHH!! I'm SO jealous. Thanks for getting a book signed for me.
~emily

I took your advice and have been sitting here at work NOT WORKING for the better part of an hour because I can't stop reading PW's love story.

Which immediately made me want to tell you about a book I read last month. It's called "True Colors" and it's by Kristin Hannah. I'd picked it up at the library (yah I'm old school) because it was about three sisters and was not a love story. If there was anything I needed less on that day, it was to start reading another love story. Only, I didn't realize that though the book is about the bond of these sisters, it also is very much about one's love story. And it rocked me to my core. It is SOOOOOOO good. Like I even had to jump to the end and manically flip pages to look for names bc I wanted to KNOW that they were together forever. Please read it.

You are UH-MAZE-ING! I was so sad to miss P-Dub but you totally made my year. I seriously think it is so selfless that you BOUGHT a cookbook and had it signed for ME only to let me give you my UNSIGNED one. You are the bomb.com and I love you.

And I'm totes jealous that you got a pic with her! You win.

Jenn, I accept your advice. I will go to half price books tomorrow. OR the library... I've been meaning to get a card!!!

T-Rog and Emily, it was the LEAST I could do.

you are so freaking hilarious. i can't seem to get into pioneer woman, but i will try again after all this. too too funny.