I went to Vegas last year Ben's 21st Birthday and it was AWESOME. We went this year with our friends Xio and Alan (parents of Miss Sophia) and Kathryn and Andy (Daniel's sis and our brother-in-law). This was our first EVER "couples' trip" and it definitely lived up to the hype.
We got in at 9:30am on Friday morning and hung out all day, walked around the Bellagio and did a little gambling. In fact, we went to "O'Shea's" which we dubbed "O'Shady's" because of the small people serving beer into large plastic jug/mugs whilst standing on the bar. The outside of the bar advertised "air conditioning and $2 beer and a 9pm FREAKS show." Incredible. 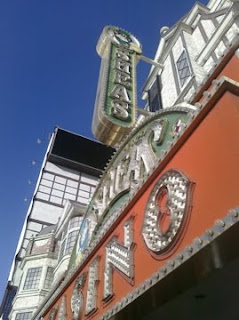 We split up for shows on Friday night... Daniel and I saw "Love" and everyone else saw "O" then the group joined us at the Mirage for dinner at Stack where we had some amazing Kobe Beef Cheese Fries.
Saturday was Alan's 30th birthday (though we were also celebrating Daniel and Xio's 30th birthdays AND Kathryn and Andy's anniversary). We had a leisurely day. Alan and I had a "date" while Xio and Daniel were napping in the afternoon and it was awesome. Then all the couples split up for dinners... Daniel and I ate at the Bellagio Steakhouse, Prime. The worst part of the weekend was not being able to finish this steak!!! It was ridiculously awesome and I was sad to leave ANY of it on the plate. 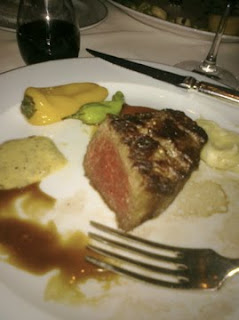 Afterwards, we met on the small patio outside Prime and had a chocolate rum cake that the hotel made for Alan and some champagne and wine. They accidentally wrote "Happy Birthday, Daniel!" on the cake... but we let Alan blow out the candle anyways. :) 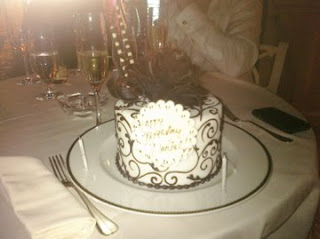 Sadly, these are the only group shots I have of the WHOLE trip. We did a horrible job taking pics. 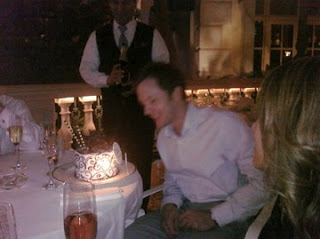 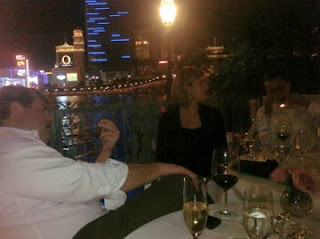 We were out there for the last fountain shows of the night. It was amazing and gorgeous! 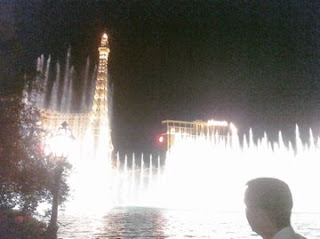 You know Daniel wasn't having a good run on the tables when he sat down to play PENNY SLOTS. 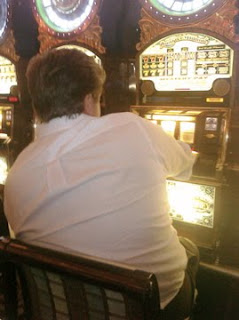 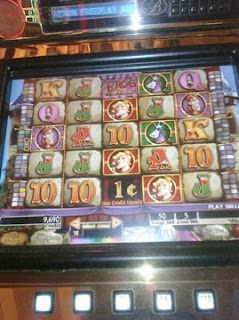 The mini Bellagio in the Conservatory made of natural things like pine cones and beans. 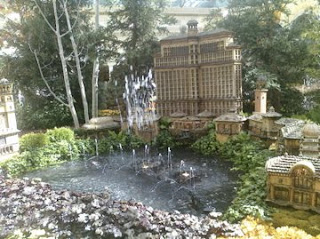 The fountains from the front. I'd never seen them from this view before and I loved it. Gave me goosebumps and may or may not have caused me to shed a tear. 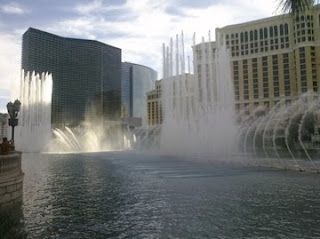 Xio and Alan left on Sunday morning and the rest of us stayed until Monday. We went to the Venetian Sunday night for dinner at Enoteca and it was great. What WAS NOT great... the smell of the Venetian. I mean... it was like burn-the-hair-out-of-your-nostrils horrifying.
I was sad to leave! BUT I'm hyped because we just found out last night that the fam is "headed West" for New Year's Eve! We are seeing the Black Eyed Peas on Thursday night, going to the Bellagio NYE party and heading home on New Year's Day. It will be a whirlwind of awesomeness. I will let you know how it goes. Now, back to reality and laundry-folding.
Posted by Liz at 3:59 PM

Stop all this nonsense right now!! Or, at least take me with you!!!! :):):) Sooooo glad you had such a great time in Vegas baby... I am really itching for a return trip. When Jordan and I lived in Cali, we were able to just drive there whenever we wanted... now, not the case. Plus I don't know if Riley and Jace would be ok alone in the hotel room for hours.

Wow...looks like SO much fun!! Definitely jealous too!! I made Joey promise to take me to Vegas for before my 30th birthday so hopefully we will get to go sometime soon :)