Sometimes we like to ask ourselves "What Would Becky Lozier Do"?  And last week Becky herself did a LOT of things she wouldn't normally do when she started "grandmother nesting" at my house and cleaned out the entire kitchen!  And I documented some of those things. 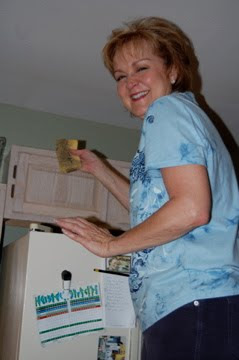 "I don't think I've ever even cleaned the top of one of MY fridges.  This is true love for you AND for my Buddy." 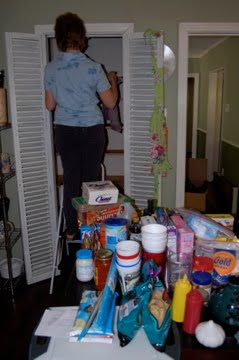 We haven't done a full clean-out of the pantry since we've lived in our house... ever.  Especially since the "critter" debacle. Becky cleaned out entire thing including some of their, shall we say, bodily functional remnants... ew. 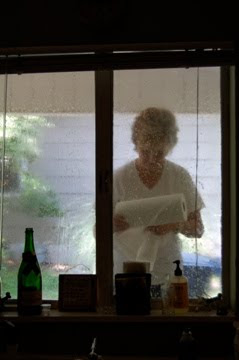 She cleaned my kitchen windows!  Inside and out.  Took her all of 3 minutes and made a huge difference.  She wouldn't let me do it because she didn't want me to climb on the two foot step ladder.  She's protective and I think it's so cute.  My dad also kept texting to make sure "his Buddy and his daughter" were getting enough rest. 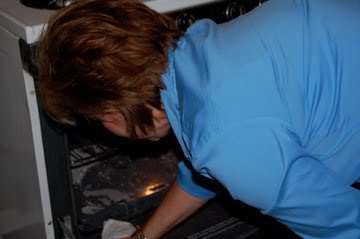 She cleaned out the oven!  And can we note how cute she looks while doing all these things?  I had on a t-shirt and some nasty cropped pants and was barely showered. 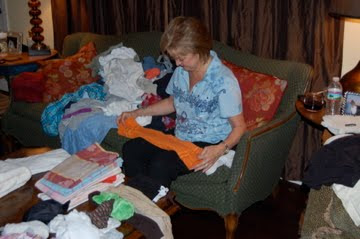 She folded laundry... including Daniel's undies.  She hasn't had to fold in mass quantities in quite awhile but she hadn't lost her knack.  I don't think the glass of wine hurt either. 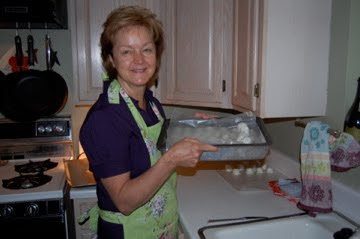 Good thing she doesn't read this or she'd yell at me for posting this pic "without her eyes on."  She helped make cake balls for my friend's baby shower even though she says, "I do lots of things.  Baking isn't one of them.  I don't like to follow the instructions."
THANKS MOMMA, AKA "B"!!!  And thank you for coming back next week to help do the whole rest of the house!  I will be posting befores and afters when we are done!
Posted by Liz at 9:02 PM

OH Becky the Loj....I literally looked at all of the pictures first and had my own commentary and my EXACT words were, "Look at her! She's got her lips on!" and then when I got to the pic with no makeup I said, "She would KILL the Loj for posting this since she doesn't have her lips on!" The I read your text! ha ha. Love it and LOVE BTL.

The only way I know how to fold laundrey is in mass quantities. :) I love that she is grandmother nesting for buddy already!! So sweet

B! I love you, I love my kids, I heart babies, but the TOP of the fridge?!? As T-Rog would say, for sobbing out loud!!!...put picture frames and shabby chic knick knacks up there. Priceless post, proves a Mother's love for her chicks and chicks to come. The Loj...I feel a very special, made with love Mother's Day gift for her this year. Flower in a painted pot, handprints on stone for the garden??? You better show up.
xoxo,

How cute is she??? Can I give you my address and you can send her my way?? SOooo impressed by all your cleaning! :)

Hey Bloj... I am in the family...and I am moving!!! Come help while your daughter makes lemonade. :)

This is priceless. I do often ask myself, "What would Becky Lozier do?" And then I do it. I love your family so much and kind of wish I was in it.